The second last event in 2018’s Fungi Festival drew a crowd of both locals and dedicated fungi enthusiasts out of their homes on a chilly Friday night. Dr Sapphire McMullan-Fisher offered an introduction to the not-for-profit citizen science organisation called Fungimap, who work to increase fungi knowledge and conservation, as well as bring people with an interest in Australian macrofungi together.

Allowing the public to easily submit their fungi observations through the Fungimap web page, or through the iNaturalist app or web page means that anyone with a keen interest and an eye for fungi can begin contributing to Australia’s fungi knowledge. With speculation that around 50% of Australia’s fungi remains formally undocumented, there is a huge need for people to get out and start recording the weird and wonderful species in their local area. Dr Sapphire noted that for those keen on exploring bush for these elusive species, proper hygiene is a must to prevent the spread of fungi to areas where it’s not welcome. This means cleaning dirt from the soles of shoes, properly cleaning and drying coats and pants, and using solvents to kill long lived spores. 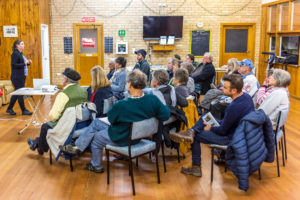 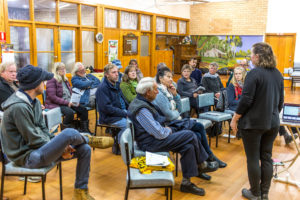